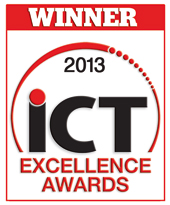 28th April 2014: Data Edge is delighted to announce that it has been shortlisted for Project of the Year (Private Sector) at the 2014 ICT Excellence Awards.

Data Edge’s pioneering solution for enet has been included as one of the best ICT projects in the private sector in Ireland this year. Data Edge has implemented a network infrastructure fault and performance management solution for enet providing them with unmatched levels of quality, reliability, predictability and scalability. Their solution is central to enet’s growth as they manage the State’s Metropolitan Area Network (MAN) programme which will enable 94 towns and cities across regional Ireland with world-class telecommunications.

This follows Data Edge’s success of winning the ICT Excellence Award for IT Project of the Year in 2013 (Public Sector) for their integrated voice and video recording system for the Irish Aviation Authority.

The Tech Excellence awards are the most highly-respected awards programme in the Irish technology sector, recognising outstanding achievements in the industry. The judges are comprised of many of Ireland’s business and technology leaders.

This year’s winner will be announced at a gala dinner to be held in Dublin on May 15th in the Ballsbridge Hotel.

Info
Products
Data Edge Ltd.
1 Royal Marine Terrace,
Strand Road, Bray,
Co. Wicklow, ROI,
A98 K3E8
+353 1 2866 777 Contact Support
web design by dmac media
We use cookies on our website to give you the most relevant experience by remembering your preferences and repeat visits. By clicking “Accept All”, you consent to the use of ALL the cookies. However, you may visit "Cookie Settings" to provide a controlled consent.
Cookie SettingsAccept All
Manage consent